Despite the credit crunch, the flu virus, the extreme cold and the enticement of cheap fares to Goa over the Christmas season, the GOA’s New Year Extravaganza attracted yet again a mega crowd of revellers to the Wandsworth Town Hall Civic Suite on Saturday 3 January 2009.

A colourful array of beautifully-clad ladies and formal-dressed men – of all ages – arrived with much bon homie and greetings of “Happy New Year” to each other, clearly determined to have a good time.  And that they did …. starting with a complimentary feni cocktail and a plate of tasty snacks and ending up with a good and enjoyable mix of music for dancing.  Maz & Co’s 7-piece band and Say One Do One’s disco got everyone on the floor with ballroom, reggae, rock n roll, not forgetting the Konkani and Kiswahili tunes as well as giving the young blood a chance to express their enthusiasm in more ways than one!  Maz & Co included an “Elvis Presley” impersonator complete with the trademark sunglasses and white suit and singing his popular hits.  There were no sweaty scarves thrown towards the appreciative audience though!

“Moto Mesta” were on hand to provide some really tasty Goan meals whilst the Carvalho family was kept busy serving reasonable-priced drinks.  Before the event ended, a raffle draw was held with a number of lucky winners going away with some wonderful prizes.

The GOA President – Flavio Gracias in his speech first of all thanked Norma Menezes Rahim – his Social Director, for the smooth organisation of this event, poignantly reminding that they had both served on the Board together for the past ten years. He also thanked his wife, Bernie as well as the rest of the Board Directors, their spouses and family members for their support. A special mention was made to the members of the Young London Goans Society and Feni Fever for their encouragement and all those who had attended this event.

Finally, Flavio announced that the worthy recipient for his annual “President’s Award” was Nina Pinto, who was recognised for her selfless and tremendous contribution and support within our community.

By the end of the function at 1.30pm, everyone agreed that they had thoroughly enjoyed themselves and were pleased to learn that the next Goan Extravaganza will be held on Saturday 9 January 2010.

Some pictures taken at this event have been included with this report.

Details of our other events during 2009 will be posted soon on this website and we look forward to your participation again. 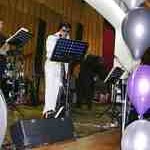 A Section of the crowd 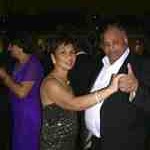