Cardinal Ivan Dias, formerly Archbishop of Bombay but now the Prefect of the Congregation for the Evangelisation of Peoples in Rome, was visiting London to attend he Lambeth Conference.  He kindly agreed to a request from the Goan Association (UK) to offer Mass for the Goan community at St Boniface Catholic Church in Tooting in Monday 21st July 2008.  Despite the short notice, the church for this 7.30pm service was packed to capacity.

In his homily, Cardinal Ivan expressed his pleasure at seeing so many members the Goan community and he was clearly delighted with the reception that he received.  The Mass was concelebrated with seven other priests, mainly from the Pilar Mission in Mitcham and two deacons.  We are extremely grateful to Fr Bonvini for allowing us to use the Church for the service.  At the end of Mass, the President, Flavio Gracias, thanked Cardinal Ivan for making the time to offer Mass and meet the people on this his very first visit to the UK.

During his short stay, Cardinal Ivan Dias resided at the Papal Nunciature in South Wimbledon.  The Papal Nuncio in this country is Archbishop Faustino Sainz Muñoz. 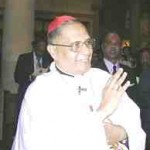 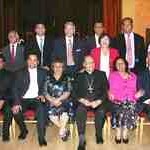 The Board of Directors with Cardinal Ivan 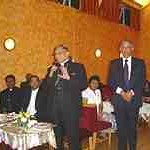 Cardinal Ivan making a speech in the hall 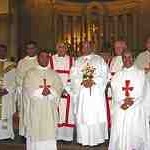 Cardinal Ivan & all the priest