Following the very successful Extravaganza Ball in January, the Board turned its attentions to planning the rest of the year’s events.  The first of these was the Anniversary/May Ball during which we had the crowning of the May King and the May Queen 2009.   On this occasion – Saturday 16th May 2009 – Wandsworth Civic Suite was booked and despite the recession, the event attracted an enthusiastic number of revellers – young adults, some little ‘uns and the young-spirited!  Nitelife provided a great range of music for all tastes and Shirley’s Kitchen was kept very busy with a really sumptuous selection of meals.  There was a special treat for everyone as we were also celebrating our 43rd Anniversary – a slurp of delicious Feni cocktail and a slice of cake.  During the proceedings, Flavio Gracias, President, welcomed everyone and especially the Chief Guest – Sri Anand Kumar, Hindi & Cultural Attaché at the Indian High Commission in London.  He also thanked all those who had worked so hard behind the scenes, particularly Norma Menezes-Rahim, Social Director, who had a team of willing helpers among whom were representatives of the Young London Goans Society (YLGS) and Fenny Fever.  Norma was presented with a beautiful bouquet of flowers in appreciation.   Flavio also made reference to the Goan Welfare Society and the updating of the GOA UK constitution.

Sri Kumar also spoke a few encouraging words to the crowd, reminding them to foster the Konkani language for without it, we have no culture.  He promised his help in this regard and surprised everyone by closing his speech with Deo borem korum – thanks to Francisco De Souza!

Everyone certainly enjoyed themselves and Norma closed the event with a grateful speech to all those who had attended and individually those who had supported her and helped her in any way – including many of the board directors and their spouses – and particularly Rosy de Souza who had single-handedly and impressively decorated the hall and tables and provided the buttonholes for the helpers.  She also thanked Nitelife, Shirley’s Kitchens and Carvalho’s Bar as well as Bernie Gracias for organising the many raffle prizes.

The YLGS and FF must be commended for their superb and good-humoured organisation in the run-up to the crowning of the May King and the May Queen and the popular choices were Junior Goes and Judie Fernandes respectively.   The runners-up were Denzil Fernandes and Marietta Fernandes. 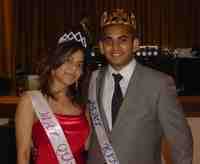