The Goan Festival held on 1st July 2006 at Archbishop Lanfranc School proved to be another memorable occasion yet again. Commenting on this  mammoth event, the President of the Goan Association (UK),  Flavio Gracias  added that just over 4,000 people attended the Festival and he was delighted with the successful outcome of the hard work in organising the event, in this our Ruby Anniversary year.

We were pleased that our Chief Guest, His Worship Cllr Rabi Martins, Chairman of Watford Council, was able to grace the occasion and stayed there for most of the day, mingling with the large crowds.

With six coaches and over 700 cars, parking was a logistical nightmare but, a team of dedicated volunteers led by Vince Fernandes resulted in the whole operation being carried out most efficiently. Judging by the numerous favourable comments we have received, the occasion was enjoyed by all those who attended and the weather gave a helping hand. Home cooked Goan fayre coupled with output from the Bar (run by the Carvalho family team) and the Cultural Programme created a very festive atmosphere with the last of the Goenkars not leaving the grounds until 9.00pm. Grateful thanks to the Organising Committee and all the numerous helpers who ensured that all went smoothly on the day.

For more photographs, please click on the link below 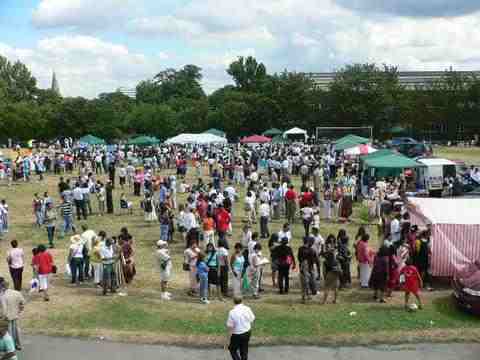