The Ruby Trook Tournament held at the A. T. C. Hall on Sunday 29th October 2006 brought together 12 Teams to this knockout Competition, which commenced at 11am. and believe it or not finished at 10pm.

In spite of being a tournament, camaraderie is in the forefront.   The achievement of moving up to the next level brings an electric feeling not just for the players but for the spectators as well.   The game of our forefathers still lives on and I for one (although not a card player) feel proud to see it played with such enthusiasm and skill.

Jacinto Fernandes spearheaded the tournament with such efficiency, as he has been doing for the last 30 years, by keeping to time, presenting trophies of quality and acknowledging the player’s efforts.  In his speech Jacinto thanked the Association for their interest in the game and for exempting the players from having to pay an entrance fee this year, as it marks the Ruby anniversary.  Jacinto also paid tribute to the faithful departed who were remembered with a minute silence, in particular, John D’Costa who was there last year and passed away only a few weeks before the tournament.   Tribute was also paid to Philip Rebello, by his family, who honoured him with their presence in full force and by catering for the event.

A Raffle prize was donated by our President and Greg Carvalho on behalf of the Carvalho Bar Team.

It was especially good to see two new players this year which sounds very promising for the future.  Ladies also participate in full swing and this year the winners ‘South East Goans’ Sports & Social Club who played superbly, won with a lady in their midst.  (Yahooo!)

The Runners up ‘Ansel’s Five’ also exceeded their excellence.

The ‘Bonnie’ Floating Trophy was presented to the winners by our Bonnie.

A date for the tournament next year is set for Sunday 28th October 2007 at the same venue.  Make it a date  – All are welcome. 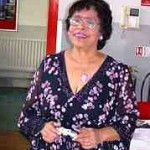 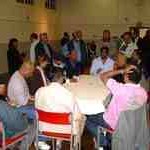 The Players in Action 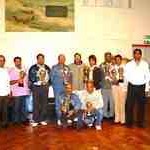