Mike & Faith Rebello celebrated their joint 60th birthdays at the Aldersbrook Lawn Tennis club in Wanstead on Saturay 26th September 2009.  It was a warm hospitable evening, in the company of family and friends. Mike’s brother Hilary from Austria completed the family ensemble.   A delicious meal was served, while drinks flowed and a guest list of 70 mingled and recalled memories of yesteryear.  Flavio Gracias, President of the G.O.A. UK raised the toast, recalling his longstanding friendship with Mike’s parents, as both he and the Rebellos hail from Colva with ancestral homes adjacent to each other. He went on to congratulate the couple on being married for 35 years. Mike ex -Kisumu & Faith ex-Jamaica met in London and married in Jamaica. Their three lovely daughters, Mericia, Nicola & Eleanor thanked them for being a great Mum & Dad. Mike replied thanking Flavio, his relatives and friends who helped make the day special and went on to regale his guests with stories of how and when they both met and how he is possibly the envy of every man, as he has 4 women waiting on him at home, but of course this has also contributed to his receding hair line!  Having cut the beautiful  cake made by  Mila Goes, Mike’s cousin, the dancing began  and went on to the midnight hour after which we all headed off home, having spent a wonderful evening in the company of a terrific couple.

Mike, Faith and their beautiful girls 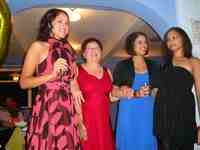